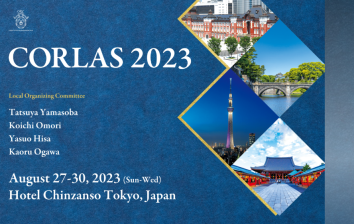 Dear Members and Friends of the Collegium ORL Amicitiae Sacrum

I hope you are all doing well at the end of this eventful year. Several crises are currently plaguing the
world – this is the time for us to strengthen and build what we know to be valuable. We are motivated
to continue advancing scientific collaboration and communication of our latest research through
CORLAS. This year’s Annual Meeting showed that all our efforts have paid off.

We have a special reason to thank our President Marcos Goycoolea, Vice President Hamlet Suárez and
their local organizing committee, who were deeply committed to their work and organized an
unforgettable Annual Meeting 2022 in Santiago de Chile. Due to the COVID-19 pandemic, the Annual
Meeting had been postponed twice (instead, we organized Zoom Meetings in 2020 and 2021) and the
live meeting could only be organized in November 2022. This particularly successful event reinforced
our confidence regarding the operations and future of CORLAS after two years of remote activities.
The Board has held several remote meetings during the past year to discuss the functions of our
society. One significant structural change is that CORLAS will now be an officially registered society.

We have also entered into an agreement with a company providing association management services
(GUARANT International, based in Prague, Czech Republic) regarding secretarial and administrative
tasks. The members have already received correspondence from the company during the past year
regarding contact details that need to be updated in our registry.

In this report you will find the Minutes of the Board Meeting and the General Assembly 2022.

Dear CORLAS members
Dear friends and colleagues
The Swiss group invites you to Bern, the capital city of Switzerland, where the CORLAS meeting 2019 will take place between August 25 and August 28. The meeting is an ideal occasion to meet colleagues and friends from all over the world, to exchange new ideas and to present your latest findings to an interested and knowledgeable audience. Besides the scientific part of the meeting, networking will be facilitated with memorable social events.
For a capital, Bern is a relatively small city, but it is situated beautifully at the Aare river and in full sight of the Alps, which are less than an hour’s drive away. Visit www.bern.com/en/ for a first glimpse of what the city has to offer!
The venue has been chosen carefully for this event. At the Kursaal Bern www.kursaal-bern.ch, an event of high quality is guaranteed, while maintaining a spectacular view over the city and the nearby Alps. A Hotel is integrated into the conference center. The city center is within walking distance, as are a number of additional hotels in offering different price ranges.
The website is up and running, visit www.corlas2019.org or mail us at info@corlas2019.org for further information.
As the local organizers, we look forward to welcoming you to the 2019 CORLAS meeting!
Prof. Martin Kompis               Prof. Marco Caversaccio
Congress president CORLAS 2019 meeting     Vice president CORLAS 2019 meeting 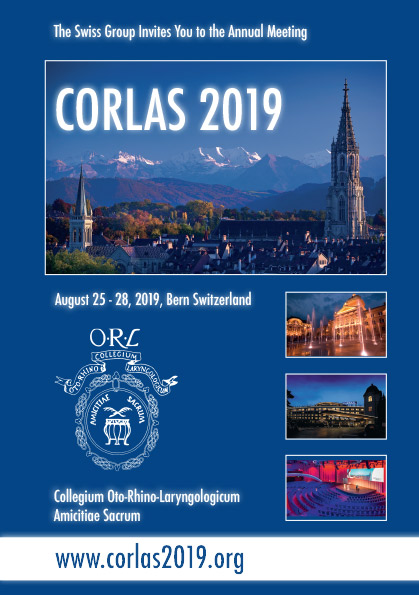 Hosting in Bordeaux the annual conference of this prestigious society, CORLAS (Collegium ORL Amicitiae Sacrum), is a huge privilege for the French group, the ENT School of Bordeaux launched by Professor Georges Portmann and so brilliantly pursued by Professor Michel Portmann.

Georges Portmann was among the founders of the Collegium and organized twice the conference in his city, in 1931 and 1956. Michel Portmann exerted the function of CORLAS Treasurer for a quarter of century (1966-1990) and then passed on this responsibility to Jean-Marie Aran for eight years (1990-1999). Paul van den Broek, then General Secretary (1987-2000), was kind enough to ask me to succeed to Jean-Marie as Treasurer, thus allowing me to join the Board and start working with Pekka Karma.
The CORLAS meeting organized in Lyon by Alain Morgon in 1999, with it’s so particular French touch throughout the conference and the post-conference tour in the Beaujolais, is still in the memory of the many attendees present.
The years during which I had the immense honor to act as General Secretary (2008-2015) have considerably influenced the course of my career and I am greatly indebted to the CORLAS French, honorary and non-honorary, members who supported me during this period so fortunate for me. Without their help, in particular that of Olivier Sterkers, I would not have been able to imagine organizing this conference in Bordeaux.
For decades Bordeaux has attracted numerous tourists knowledgeable in wine. With the remarkable work undertaken by Alain Juppé, Mayor of the city since 1995, the city of Bordeaux nowadays also seduces worldwide visitors for the beauty of many stone-buildings, the delicate homogeneity of its avenues, the renovated banks of its Garonne River. Water and soil have sculpted the organization of the vineyards, Saint-Emilion and Pomerol on the right bank of the Dordogne, Medoc on the left bank of the Gironde estuary, and the trio Graves, Pessac-Léognan and Sauternes on the left bank of the Garonne, south to the city.
The President and the Vice-President of the Bordeaux conference along with the city of Bordeaux will do their best to provide our friends from all around the world with a warm and hearty welcome in August 2016.